But onwards and upwards (or downwards geographically)…Hello Malaysia, country number 4.

Once again I’m arriving somewhere without a clue or plan on what I’m doing here. I just wanted to get to my hostel and figure it all out when I got there, it’s been working for me so far. I do really need a plan for Christmas Day though – I already anticipate that it’s not going to be good. My hope is that I meet some awesome people again… but from the people I’ve already met the bar is very high!!

Arriving in Kuala Lumpur was a breeze…once I knew what I was doing. I’m going to share this info because it really helped me out (thanks Bianca!!) If this information isn’t useful skip ahead two paragraphs.

So the airport is out of town, like an hour away from the action..  you can take a taxi but it will cost you 100-150RB. Alternatively take a train into Sentral for 35RB (takes half an hour) or a bus/coach for 10RB (takes 1 hour 15). For budget reasons I took the bus.

Once at Sentral, you eventually walk into a train station. But if you want to go more into town you can take the monorail which means walking up the escalators, through Nu Mall into another train station and buy your token from either a touch screen machine or the information point (if you have cash over 10RB as the machine doesn’t accept big money). It only cost me 2.1RB to Butik Buntang which is across the road from Sunshine Bedz and every Mall in town – not intentional, promise!!! I was also around the corner from Food Street, a 25 minute walk from Central Market and a 20 minute walk to the Twin Towers. Perfect Location!

Sunshine Bedz is awesome – very sociable, non squeaky beds and very clean. Very important qualities. There’s also a good bunch of people working there with a bizarre sense of humour. On arrival I was told they needed to frisk me for drugs, I naively believed them (in my defence I was still feverish). It was also only 37.50 (£7) a night. Bargain price for being right in the city. The hostel also was across the road from every mall in town (not intentional I promise).

So the only thing I had eaten in the past 48hours was a pineapple. But I really could not stomach rice or noodles anymore, I needed some home comforts. Then destiny happened…yes, destiny. I was messaging Steven (Friend of 10 years, lived in KL, soon to be my Indonesian travel buddy) who informed me… there’s a Nando’s 5 minutes down the road. One of my favourite chain restaurants from home is down the road??!?!! This got me out of bed in a flash. To make things even better the price was cheaper by like half and they serve you (not like in the UK where you have to get up to order). I couldn’t have been happier, it was actually really nice to be by myself.

That evening after thinking there could be a chance I could have this 4 bed dorm to myself…in walks Will from Canada. We went out to Food Street – I had already eaten so I just watched him eat but had some coconut water for energy. That evening the majority of the hostel hit the town…I hit my bed!

The following day I met Bianca (my Kuala Lumpur advisor). I’ve actually not met her before,  just briefly at a New Years Party back in 2007 I think. But from the friends who know her I had heard so many amazing things so I was really keen to meet her properly! Bianca and her lovely boyfriend Juan took me to a local place for breakfast – great food and great company.

When I headed back to the hostel I found Will again and we ventured over to Central Market and Chinatown. On the way we met one hell of a woman – a 60 year old lady travelling alone, apparently she does it for 6 months every year. Brilliant! You need to applaud people with the balls to do that. She seemed genuinely happy and very energetic. I doubt I’ll be like that at that age at this rate.

Chinatown personally wasn’t anything special. Just a market with lanterns. But the Central Market was actually really niche, it was indoors and the items they sold were a bit different. There were items from Malaysia, China and India.

Through the invention of Facebook I found out that my friend who I had met in China, Tom was in KL and just staying down the road. It was great to catch up on where he’d been and what he’d seen since our amazing 25 days in Chinq. Throughout Asia we’ve done a very similar route but the only difference was that Tom was om scheduled tours which are harder to get away from – but I’m glad I was finally able track this guy down! 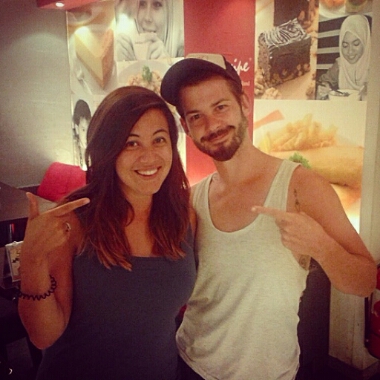 The next day I was supposed to leave for Malaka, a town half way between KL and Singapore recommended to me by an Irish guy during breakfast. However, I was still feeling tired so I decided not to and it felt GREAT! One of the perks of travelling is that you can change you plans to suit you. That evening though I did attempt to be fun again and I played some drinking game with some 18/19 year olds (I’m totally down with the kids). Dinner, drinking, pool tournament, 4am, bed.