Personally I was really looking forward to some trekking and much needed exercise!

On arrival in Sapa, following a 9 hour night bus, we were greeted by a thick misty fog and crowd of Vietnamese women at the coach door – all beautifully dressed in colourful patterned clothes and some carrying young children on their backs. This seriously was a surreal sight at 6am, it felt like I was still dreaming.

After being hauled onto a minibus and arriving at the Sapa Summit hotel to drop off our big backpacks, Jake and Rich went off to climb Fanzipan mountain I went to a ‘medium trek’ tour and to spend the night at a homestay.

As we left the hotel, a new crowd of Vietnamese ladies started to follow us. And each one appeared to choose one of the eight people on my tour as a travel buddy. My lady was called San…

I wasn’t sure whether they were tag alongs or part of the tour at first! But eventually their intentions became clear…especially as sta rted started making me gifts weaved from leaves.

The trek was very challenging as it was wet and muddy as we walked across, up and down rice fields
I was slipping and sliding all over the place so San conveniently held me up the majority of the way. What a woman!! I was so glad I opted to rent wellies that day as I was up to my knees in mud. 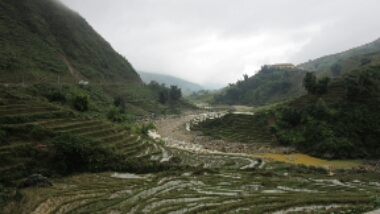 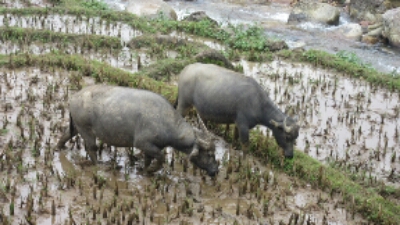 Our tourguide was a well spoken traditional Vietnamese woman called Mang – she was very sweet and looked quite young. She was 22, was married and has a little girl.

She explained how schooling in Sapa was up to the age of 15 and if you wanted to go to high school you had to pay. Also, now I don’t know if this is 100% true, but apparently in villages you can swap your children if you have too many of the same gender as only one boy can inherit the land. I totally believed it, but apparently after telling Jake this story the tour guide he asked the following day was totally disgusted by this suggestion. Awkward

In regards to income I presumed it was the rice fields but it turns out the rice produced in Sapa is just enough to feed the locals and so their income comes from tourism.

So after our 14KM trek we weren’t suprised that this happened: 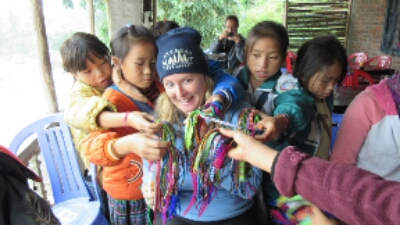 I also bought a purse from San that I genuinely did not need, but I did want to show my thanks to her from getting me down that trek alive. Luckily the lovely Cheryl bought it off me for the same price so it was a win win situation.

As we arrived in Dzay village for our homestay, I expected a very rural village but instead there was a couple bars and massage parlours. It does disappoint me at times how much tourism takes over places like this, but they do need to make money.

We found that the homestay house very basic. Just a living room and kitchen and bathroom outside. Above was a room of mattresses with mosquito nets for us to sleep – it did feel incredibly real and I’m really glad I did this to get a feel of the life in Sapa rather than just staying in hostels/hostels. They also had lots of animals such as a kitten is (which I’ll get back to), dogs, puppies and chickens.

I really can’t describe in words how fun our first night was. I have never laughed so much about so many random and bizarre things!
The company, a packet of cards, Uno, beers and happy water made the evening! We had 2 girls from Germany (Anna and Hannah), 4 from the UK (Cheryl, Kat, Felicity and myself), 1 Lithuanian (Judre) and the funniest Italian DJ around (Mirka)! Each one of us a single traveller. However from the list of rules we were given, we needed to “limit our voices” from 10.30 so sadly our night was cut short.

The kitten that lived there really made me feel really uneasy. It just didn’t seem like a normal cat and I really think it was either ill or possessed! We could hear it meowing all night and it was chilling! Cheryl took a picture of him/her and this unedited/no filtered picture says it all. 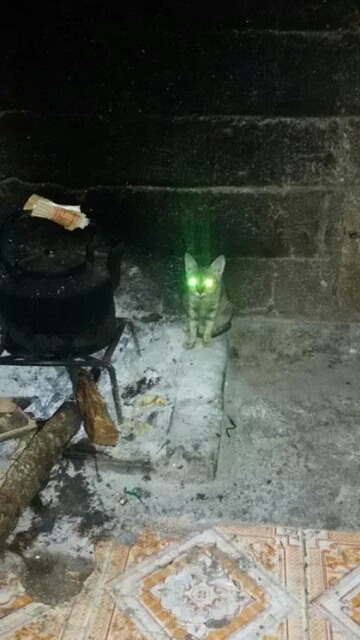 The following day we were up bright and early for another, easier trek. This time we were able to digest the spectacular views. They were breathtaking!

We even found a pond full of 4 leaf clovers.

We ended the tour with a waterfall followed by lunch before heading back to the hotel. Thanks for an awesome night guys!

That night we stayed at the hotel and annoyingly got shooed out of the social dining area at 9pm and told to go to bed. Okie dokie then!

The next day I had a free morning so I went exploring. I randomly found myself at the bottom of Harong Mountain so I paid the entrance fee and began to trek upwards. This is the most touristy mountain I have ever seen, lots of random cartoon character statues and nicely planted gardens – it was a bit weird.  Eventually I got passed the tourist bits (and the women trekking in heels) and was up in the caves/peaks at the top exploring, however all the routes at the top were a bit of a maze and there was no one around but me. My mind then began to wonder… I told no one where I was going.What if I slip and hurt myself? What if I go missing? What if someone followed me up? I am starting to worry similarly to my mum (Hi mum!) and should really stop thinking so much but it is something that often panics me about being by myself in new places because I’m so clumsy and I always talk to random people. But it was fine and I was glad I did it!

That afternoon I was back on tour and we went to visit CatCat village and it’s waterfall.

Overall I’m so glad I did Sapa and it was totally all down to recommendations from other people. It did sometimes feel like an Alpine ski resort because of the misty air and mountains but it was nice and it was good to get some fresh air.