It surprised me how many “Really!?”, “Don’t go alone” , “Are you joining a tour group” , “Are you sure you want to go there?” comments I received.

The general consensus was that it is very unsafe, mainly due to the high crime shown in the media and in movies, and that if I was to go I should be on my guard at all times, bring Stu with me everywhere I go and basically just expect to be robbed…

So when I arrived in Mexico City on 30th October in the late evening, I felt very on edge, was gripping tightly to my bags, was wearing a money belt under my clothes and I honestly expected the worst. But I think expecting the worst is often a good thing because I’ve been pleasantly surprised. We are 5 days in and we’re really enjoying Mexico City – the people, the culture, the food and the Day of the Dead Festival. We really did pick the perfect time of year to come.

Stu and I are here with Sarah and Averil. I met Sarah in a hostel in Vancouver and I met Averil via another travel friend in London, then again in Vancouver. The girls are with us just over a week and I couldn’t be happier that they’re with us. Although I’m worried they will witness my stressy travel self and unfriend me after this trip, we will see!

The first day was slightly sad for me… during my 24 hour stop off in the UK I needed to get my phone fixed (I broke the screen, again). I paid a ridiculous £79.99 in Timpsons to get it fixed, however when I got home I realised the camera and torch was no longer working. With no time left at home, I had to get it fixed in Mexico City – our hostel receptionist wrote out a note for me in Spanish and I dropped off my phone at a shop where they said it would take 30 minutes (I knew this via using a Spanish translate app called SpanishDict), I’m so glad I downloaded it!

Whilst waiting we bought a few fruit juices and sat on a wall around a tree. Whilst sat here I noticed a strong stench of urine, ignored it for it a bit, then noticed the smell was getting stronger. As I sat up I noticed the shirt sleeve of the checkered shirt wrapped around my waist was drenched. I looked down and saw that next to me on the wall was a little hole with a puddle of urine inside and my shirt was drenched in it. 🤮

I soon found a trash can and said goodbye to my shirt.

For the first few days we explored the city by foot and did 2 free walking tours. 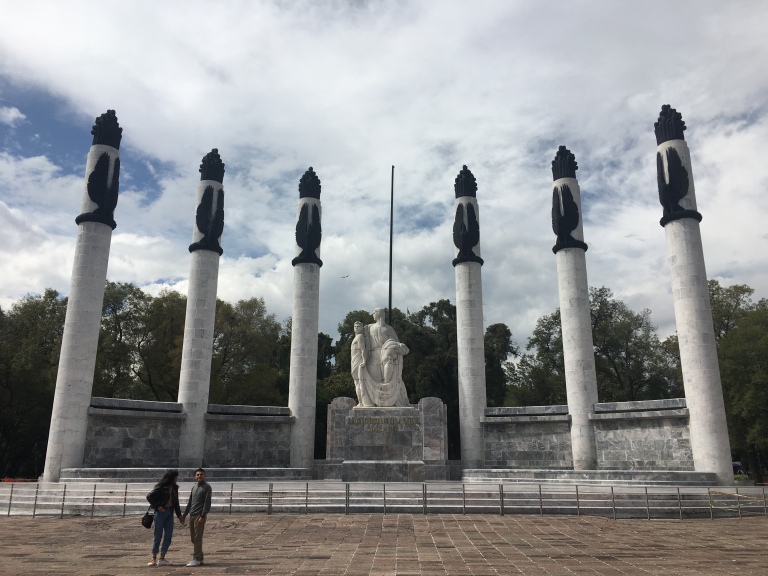 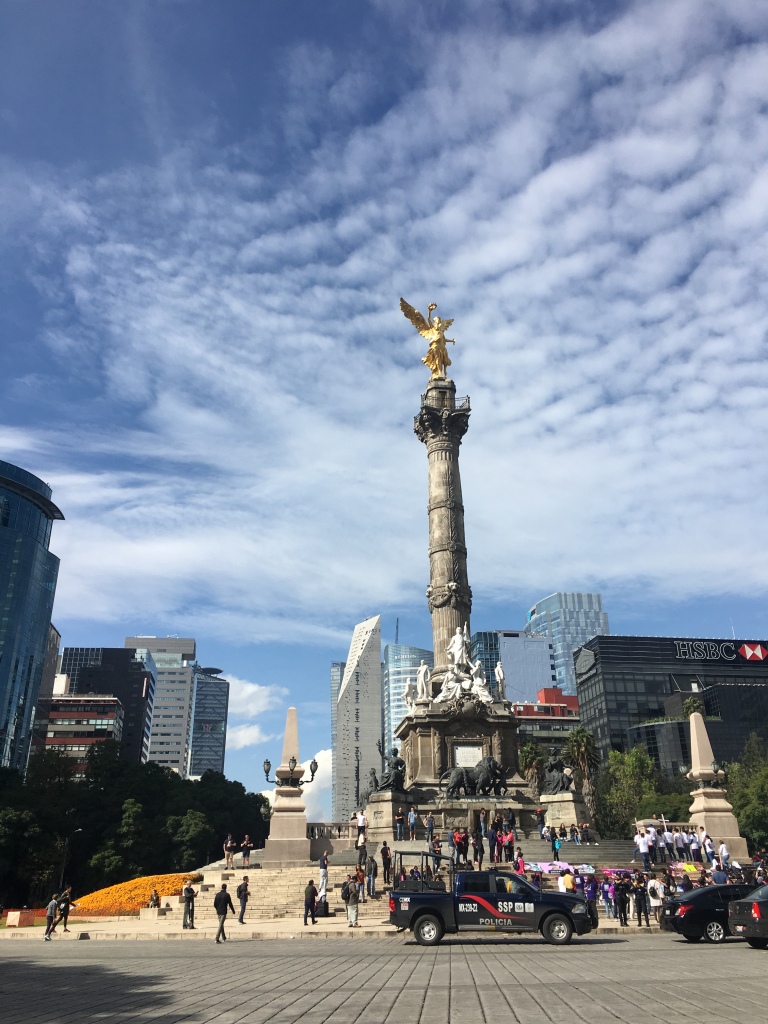 The city is huge, so we only saw parts accessible by foot but what really stood out was the Day of the Dead decor and celebrations around the city, it has really made this trip extra special. The streets were decorated with sugar skulls, bunting, marigold flowers and murals. 80% of people were also all dressed up in fancy dress. 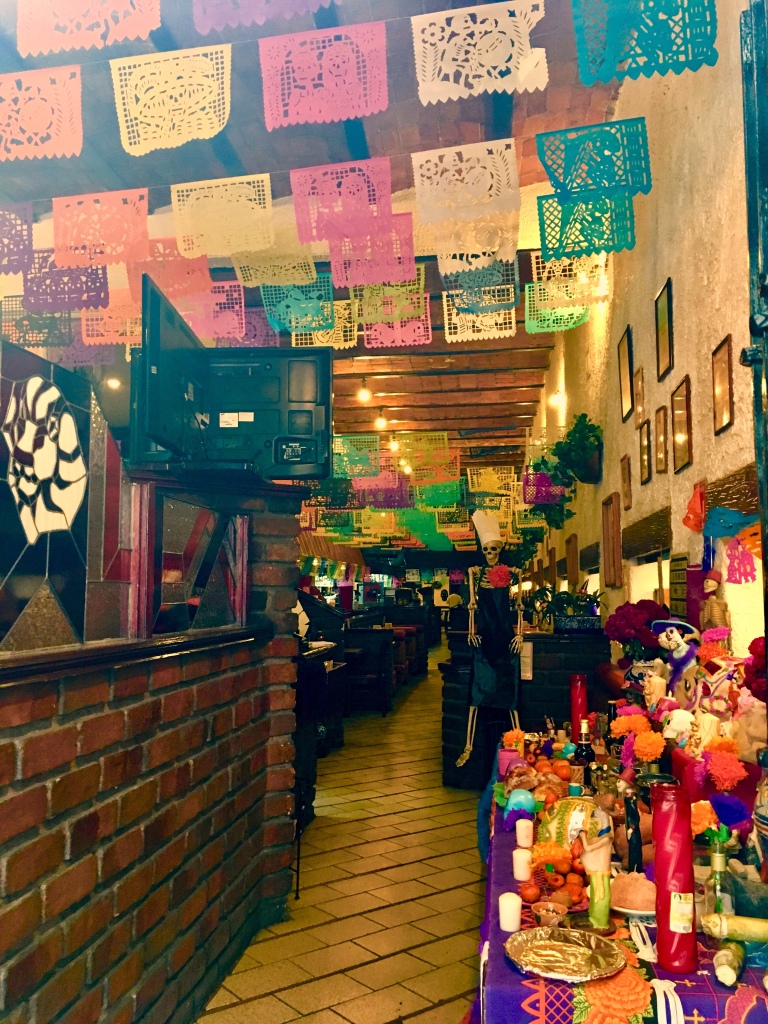 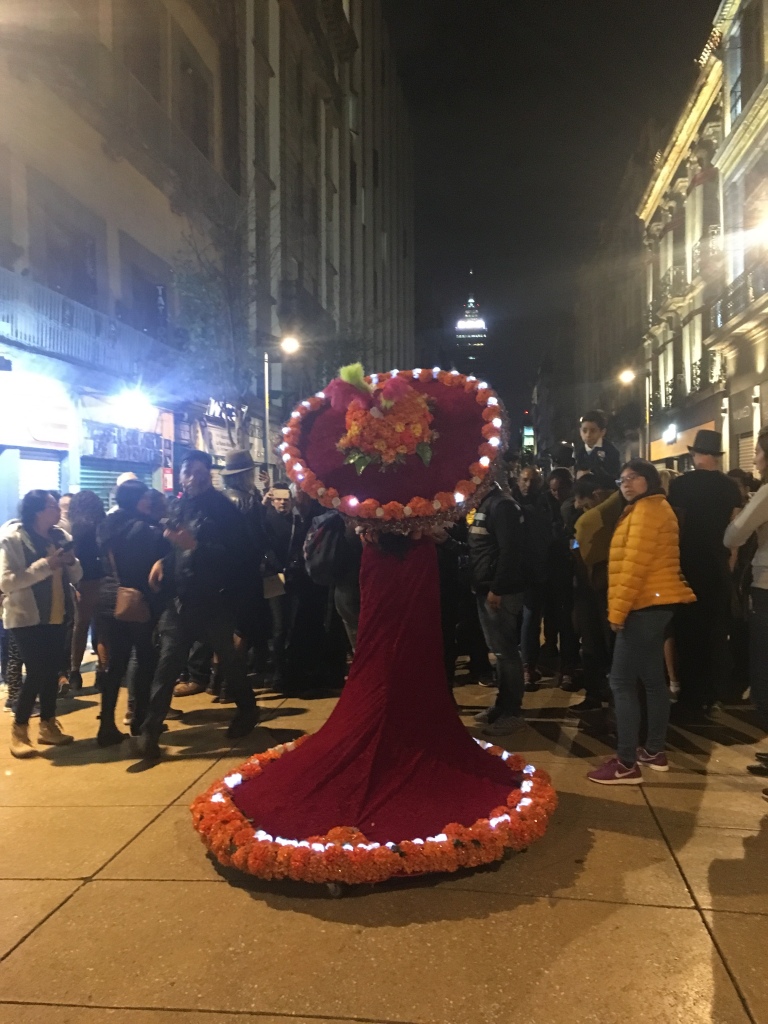 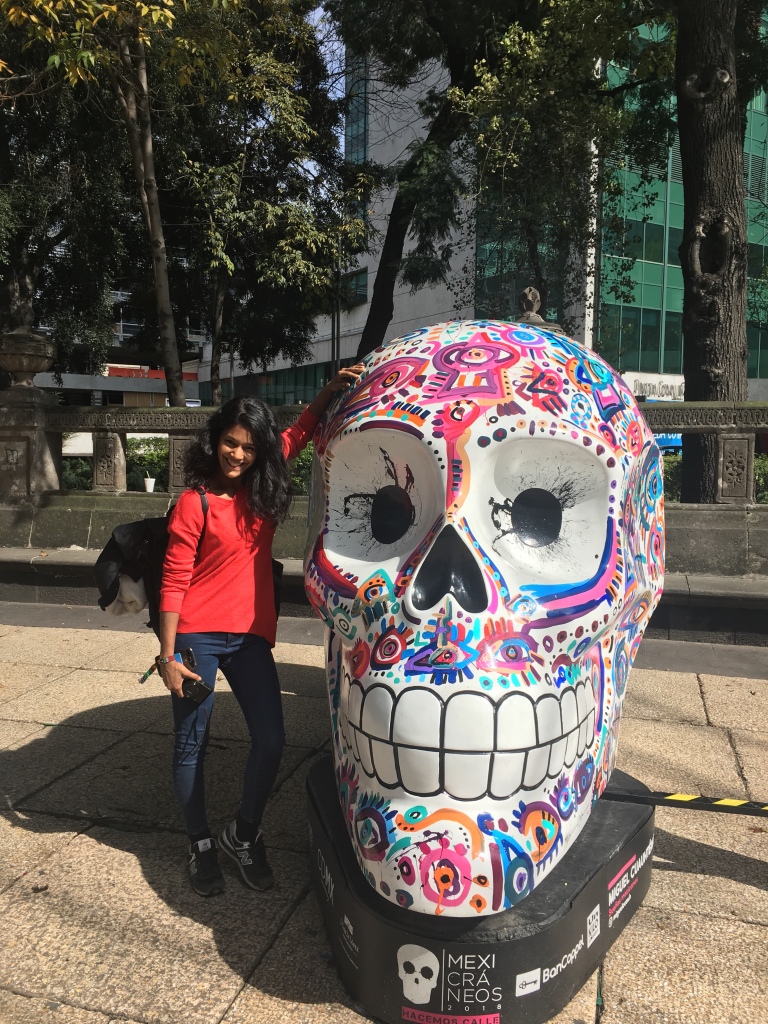 The 2nd November is the main day of Day of the Dead, and we decided to spend this in Mixquic – a village 1.5 hours out of Mexico. However getting there looked like a mission – I ended up buying a SIM card (£5 for 3GB for the month) then getting Uber’s which only cost £15 (return). The only other options were tours (over £80 per person) or renting a car (no way, the roads and how people drive here are insane!!!) Uber worked quite well and we’ve been taking them everywhere ever since.

The festival and town of Mixquic was like nothing I’ve ever seen (or smelt) before. The town apparently starts prepping for the festival 3 months before and I can see why! It’s such a small town but coming in and leaving was carnage – miles and miles of cars and buses trying to get in and out. The smell I mentioned was the incense they burnt all over the festival – it was frankincense and the smoke you can see in the graveyards shows how much was being burnt at the time!

We arrived around 2pm and just walked around, ate the food and local drink then at sunset got trapped amoungst the 100’s of people in (and trying to get in the graveyard). It was just like the Disney movie Coco (a must see to understand Day of the Dead). We left around 8 and didn’t get in our Uber til 9:30pm due to the heavy traffic. But we’re so glad we made the journey! 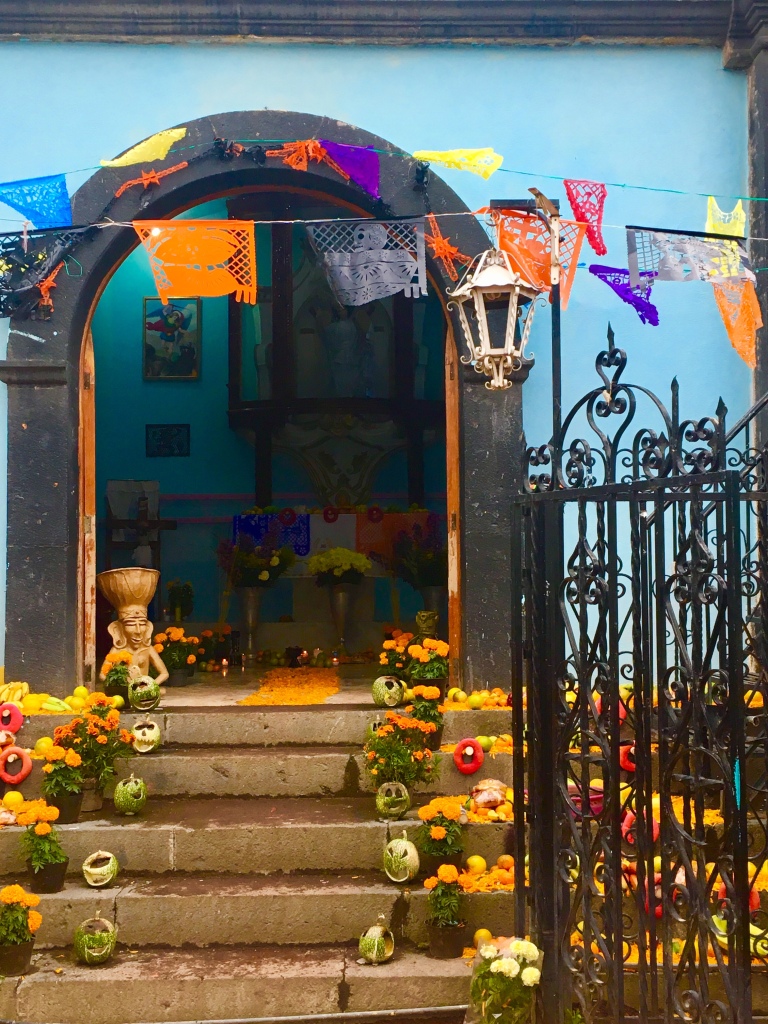 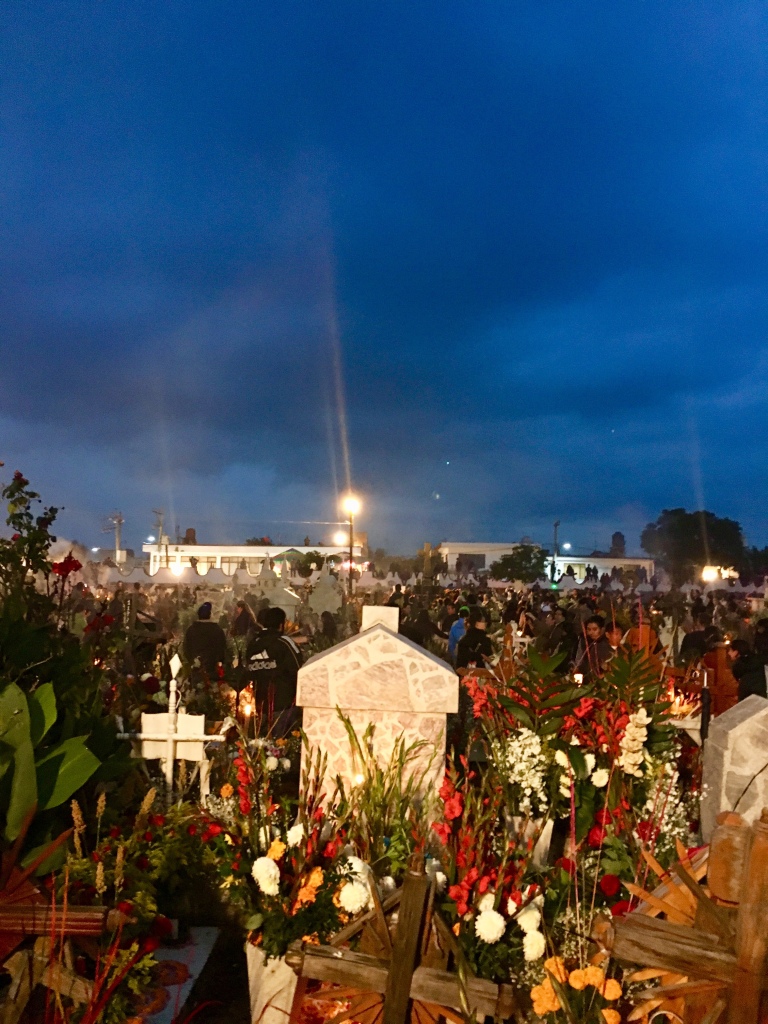 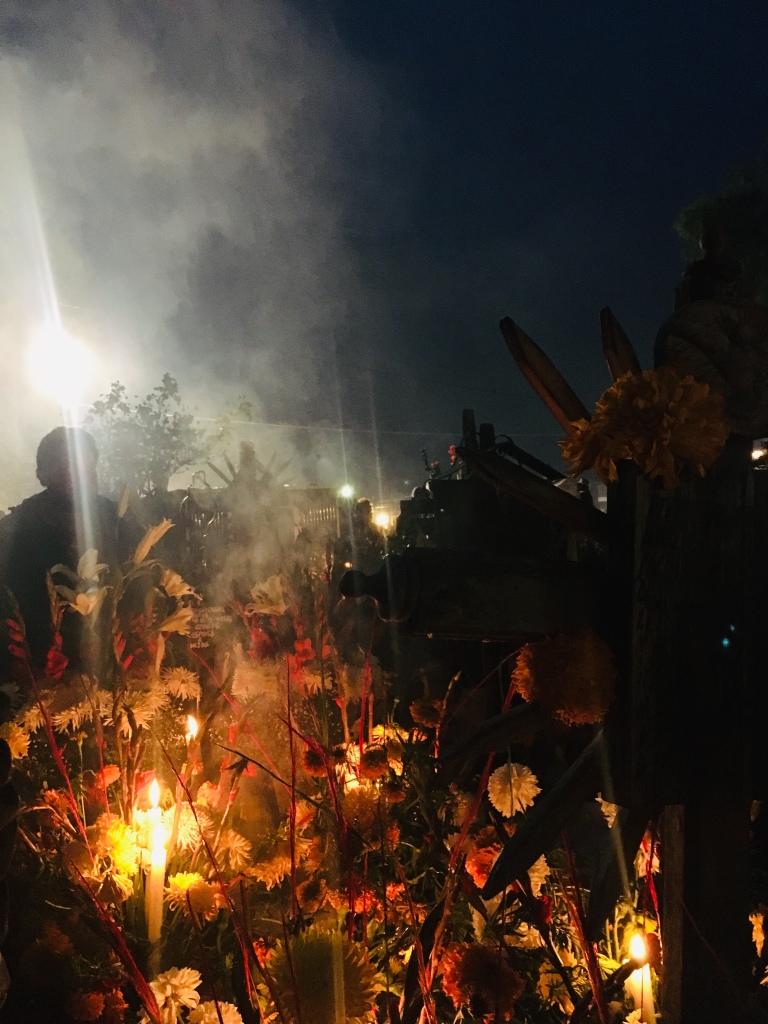