Tokyo. The Capital City of Japan. How to make the most of 4 nights, 5 days…

For the first night in Tokyo I booked a capsule dorm for just one night. Capsule hotels started in Osaka, Japan in 1979 and they unique form of accommodations developed for working Japanese men who are “too busy to go home”.

The rooms/beds are individual blocks of small, coffin sized living quarters with just enough room to sleep. This was a something I had to try out for the experience. Most capsule hotels also have a spa and sauna for guests so I figured an evening in a capsule would be an experience in itself with no need to go anywhere. However I found booking a capsule was difficult as many were all men dorms. I only found three that catered to women.

On arrival I was given a key, towel, a robe, and the rules. There were floors and a spa for women, floors and a spa for men and you could sit together in reception. I was the most excited about this floor length robe I had been handed – this felt like a piece of luxury I had never experienced before. I was not taking it off til check out!! My first point of call was to try out the spa… I took a little walk down to see how it worked. It was empty (PERFECT!) but a bit strange. There was a room with a giant bath at the end and then 6 shower cubicles with a little stool and a shower head, but these shower cubicles/booths were not covered so if anyone walked in/through you’d see everything which is probably why the sexes are split up. But I was wearing a bikini anyways. So I showered and headed into the steam room which was little ‘beds’ made of stone with a towel on top. An hour later I woke up from a lovely nap.

Would I recommend a capsule for a backpacker? YES. It’s a very peaceful, relaxing experience and different from anywhere else I have ever stayed. I felt very refreshed after my stay. Potentially somewhere to consider if you need a few days to recover after drinking or need some time by yourself. The only downfall was the lack of information for tourists, as they don’t expect tourists. So asking where to see in the area was a struggle. But as I said it should definitely be tried out as something new. 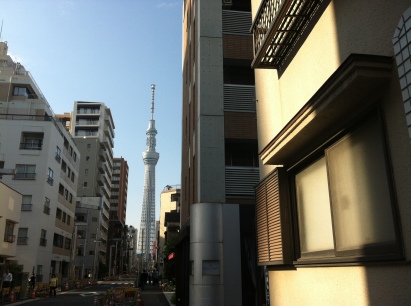 Following the Capsule I had booked 2 nights in K’s House, it was a 20 minute walk from the Capsule hotel, but it took my poor map readng skills an hour. I had 4 more nights left in Tokyo at this point and my plan was to have a couple nights in a hostel followed by an expensive hotel treat to end my travels. What I liked about my arrival to this hostel was that they greet all their new guests by a welcome sign outside. 🙂

Kai was on reception when I checked in, we became good friends during my stay in Tokyo as he had quite a few recommendations and was also a traveller himself. He recommended visiting the local area that day and we were just a 20 minute walk from Asakusa. Asakusa’s main attraction is Sensoji, the most famous Buddhist temple in Tokyo, built in the 7th century and to enter the temple you walk through the gate of Kaminarimon. Around the temple is Nakamise Shopping Street, so within this area there was plenty to walk around and explore. I even saw an amazing view of the Asahi Beer Tower and Flame d’or. 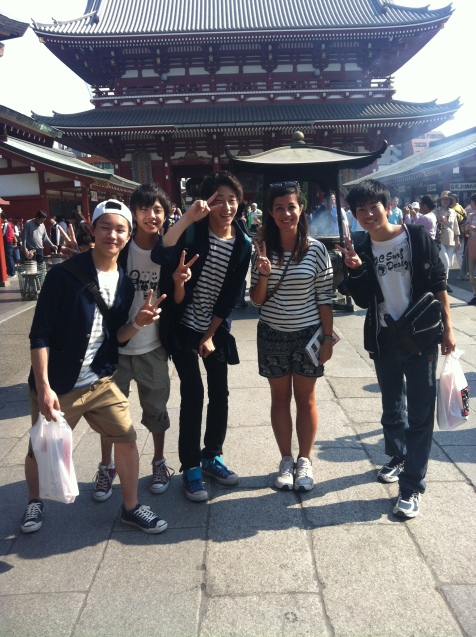 I am very pleased to announce that all of these are true (from my experience). The lady in my photo below walked with me for about 15 minutes when I asked for directions. My map reading skills were certainly letting me down so far in Tokyo. This city is HUGE, it’s bigger than London so there was no way I was going to see it all.

In relation to the food theory, the streets of Japan are very clean and safe. I have never felt safer in my life. But I saw a few signs about not eating on the streets. Also when I bought some cream puff cakes (yummy) and scoffed them down, I did get a few looks. But after researching this online I have not 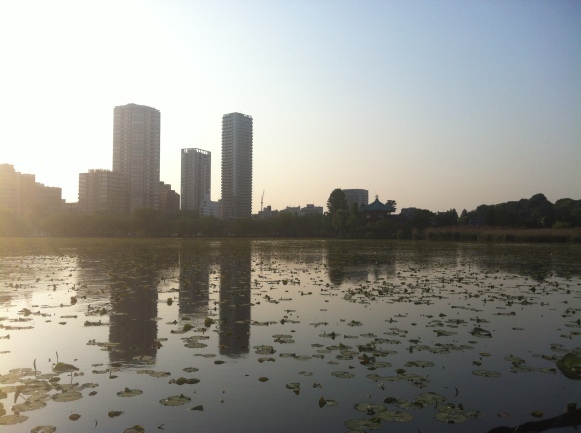 For dinner that night I found a fast food noodle bar. I love these. I really really love these!! You walk in, go to a machine and select your order – if you are lucky there are pictures. Once this is done, you choose a seat and wait for it to arrive and you often sit around a bar and can watch your meal get made. I had dipping noodles, where the noodles and ingredients are served separate to the noodles. IT WAS SO DELICIOUS!!!

That evening I planned to meet Amelia, a Canadian girl I had met in Kyoto who is working her way around Japan (I’m not jealous). 🙂 She introduced me to some awesome people that evening and to the nicest tasting Saki I have ever encountered from a 7/11. It’s worth mentioning that 7/11’s (and there’s another store beginning with D that I can’t remember) are one of my favourite things about Japan. As you enter music plays and you immediately feel like you are entering a Pokemon game. Then the food and drink in these stores are all you will need during your stay in Tokyo, it’s pretty much where I ate most days for lunch and snacking. There’s so much sushi, instant noodles, cakes, treats, drinks and more. This store came in handy when we arrived at a bar and we had to wait for a seat, this was a 300 yen bar where all the drinks cost the same. We went to a 7/11 and picked up a few drinks whilst we waited.

I didn’t stay out too late that night as I had a very very very serious day planned for following day that I had been preparing for for quite some time. I had a day trip to Mount Fuji.

I had a 2 hour 6am coach to Kawaguchiko station where I was being picked up for a walking and bus tour around the area for the day. The day trip cost 6,800 yen and the coach ticket to get there was 2,500 yen. So 9,300 yen in total (50 British Pounds). Ouch. But so necessary, I only had a day to see everything.

It was off peak season, so I knew I had no option to climb Mt. Fuji, but you still can go up part of the volcano. The first stop was the 5th level of Mt.Fuji which is on the peak of Mt.Komitake which is a part of Mt.Fuji. Today the 5th level( 2305m) is a major base for climbing Mt.Fuji. It is the furthest you can go up at this time of year.

What became apparent at this time was that Japan’s tallest volcano was no where to be seen. No where. It was far too cloudy. 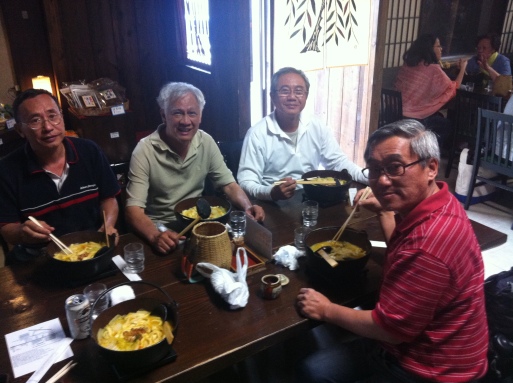 On the drive back to the coach station, around 4 pm the coach came to an all mighty halt. There is was, the best view of Mount Fuji we were going to see…

Following Mount Fuji, the days ahead were still packed with seeing and eating as much as humanly possible. The following day I had plans to see Yuri during the day to go in search of Harajuku girls, walking through the parks and get a photo at the famous Shibuya Crossing. 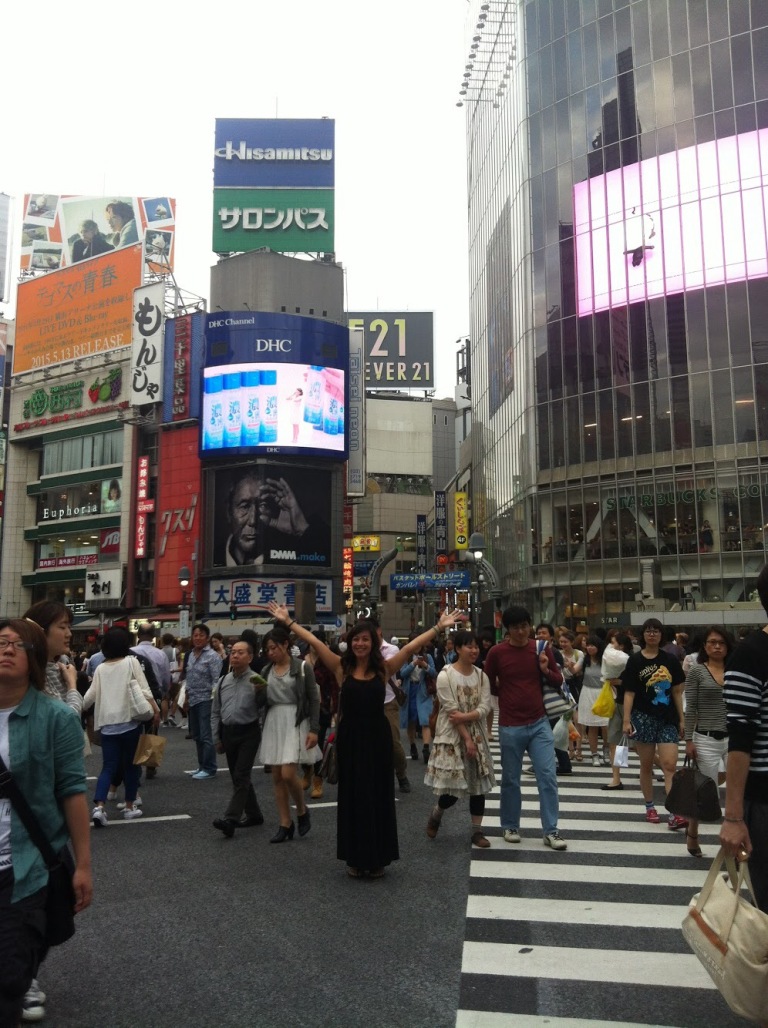 In the evening I had dinner plans on board a boat with Aya, Cedric (I met these two in Kyoto) and Thomas (a new German friend we met that evening via Aya). This dinner was a very special treat from Aya. On this boat you choose what dish you want from the menu and you cook it up yourself on the hot stove in front of you. 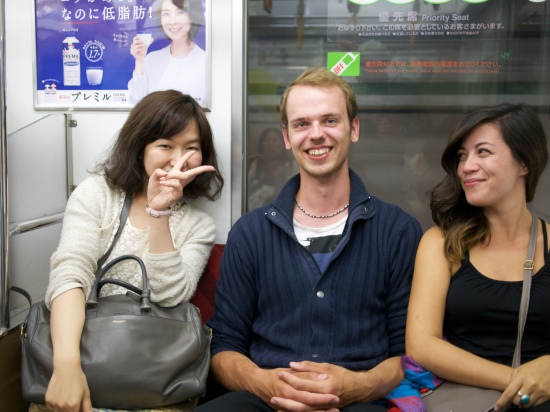 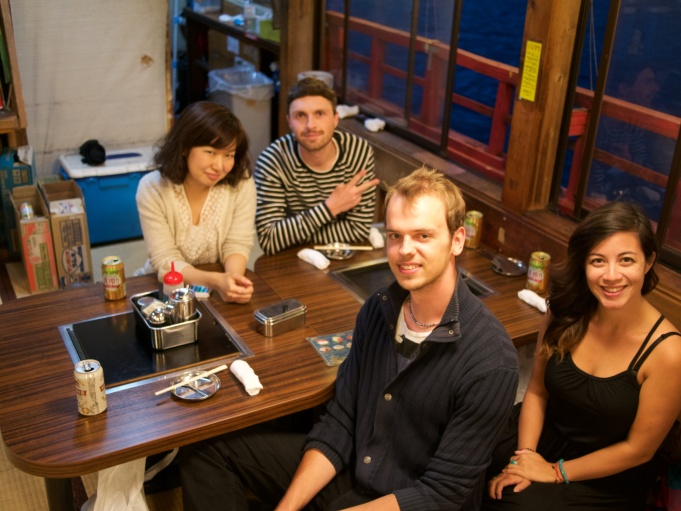 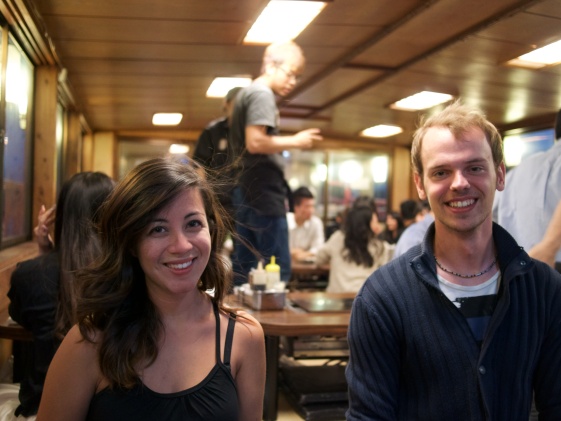 The food was a mixture of cabbage dishes which sounds bizarre – but it was delicious even for someone who doesn’t like veggies. After an evening of Karaoke and Plum wine we stayed up until dawn so we could go to the famous fish auction market.

We arrived there at around 2.45 am and the long wait began…

VERDICT: It really, really was not worth the wait. Around 5.30am were guided into a room of men, bidding on fish all lined up in a row. Then 5 minutes later we were guided out… 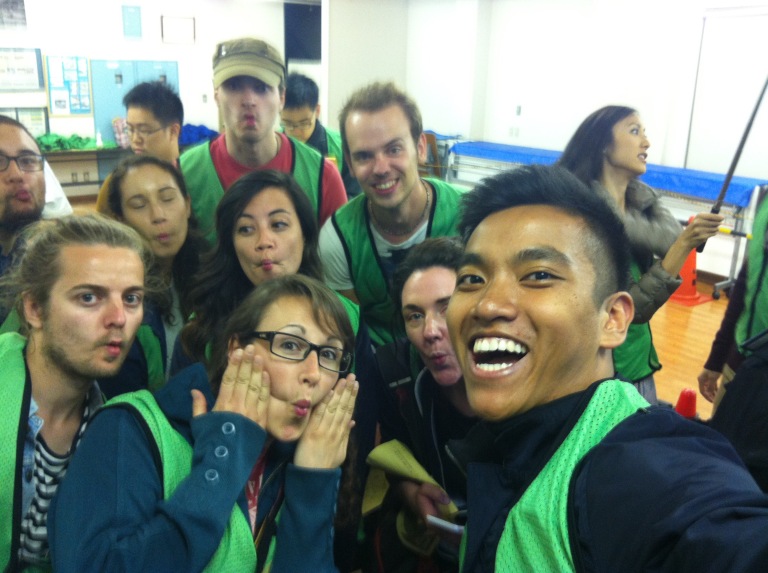 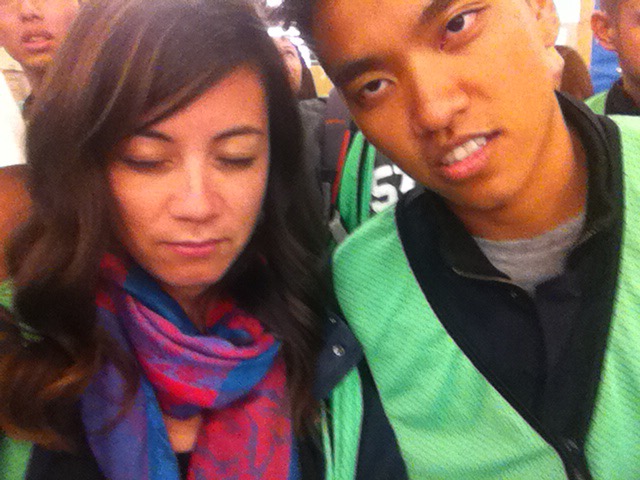 Following this half the group went for food (apparently seafood/sushi here is the best) and the other half of us went back to our hostels to sleep. I chose sleep.

The next day was my final day in Japan and therefore my last day of my travels. In Tokyo there are strange themed cafes – Cats, Maids, Alice in Wonderland and more. I had to try one…

For the price of a coffee you get to choose a rabbit to hang out with as you enjoy your drink. I chose the giant one… 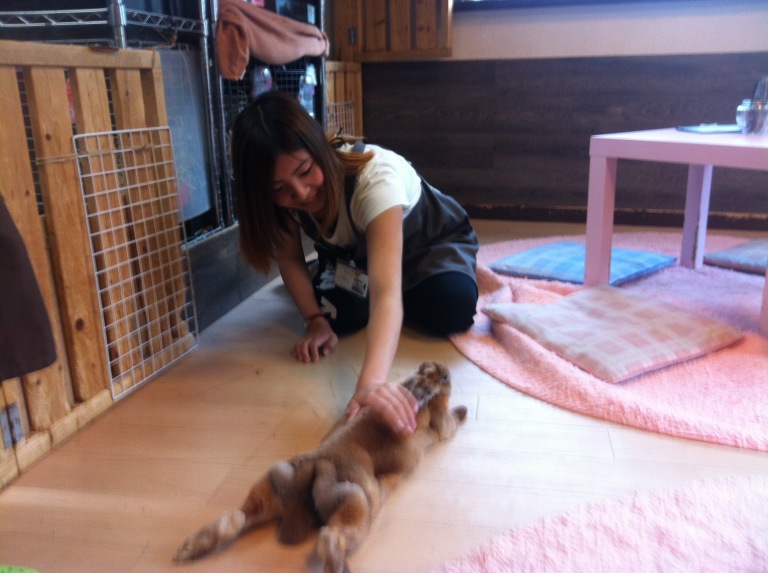 You also can spend extra to feed them… 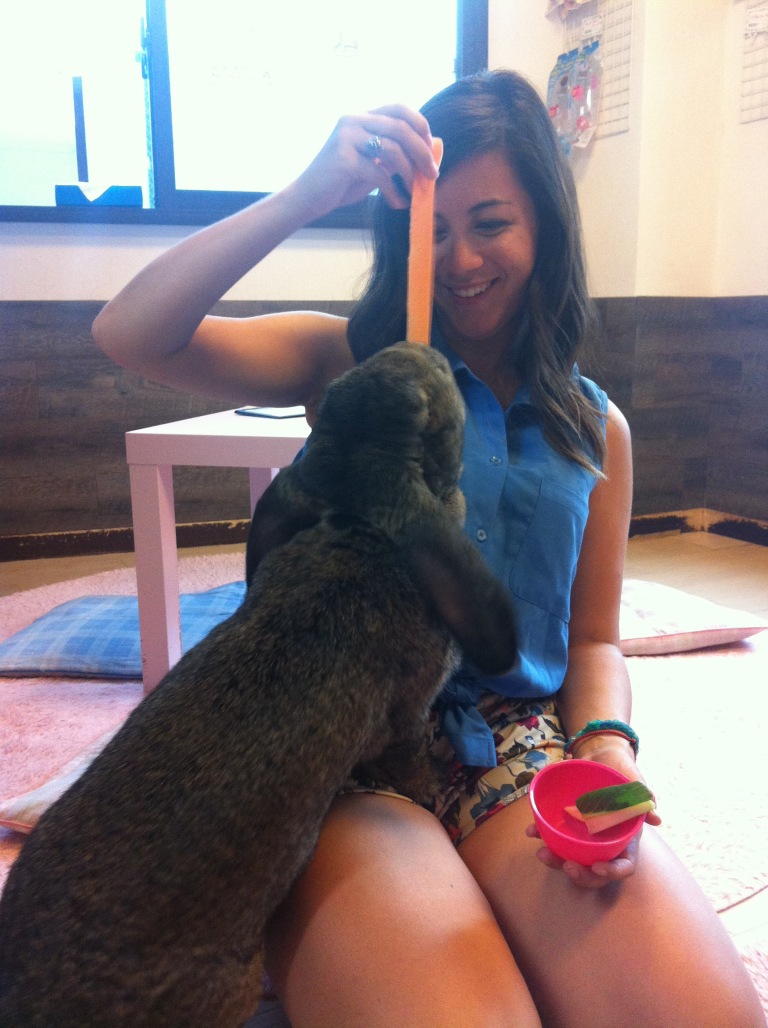 The remainder of my day was spent buying souvenirs such a Pokémon socks and two large packs of noodles – as much as I could fit in my backpack.

Then it was time to catch a train to the airport and head back to the UK.

1 week later I booked a flight to Germany, the travels continued.