At 4.55pm we flew from Christchurch to Sydney (for fuel) and then to Bangkok… we had dreaded this 14 hour flight for a while, we’d booked it reluctantly a year in advance and it waa an awkward long flight that arrived at midnight, and it sucks to arrive in places around Asia at night!! However from all my earlier travels around Asia everyone was raving about Laos, so much so that I had to squeeze it in somewhere. So it actually worked out well and we would be due to arrive in Vientiene, Laos at 11am – just an hour and 15 flight.

With 9 hours to spare inbetween we slept in Bangkok airport in true homeless/backpacker style on some benches… classy!! However I woke up every hour just to check our bags were still there. 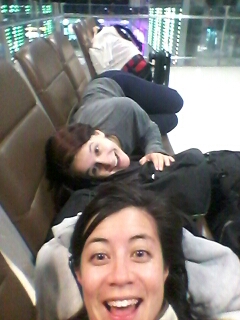 As we landed in the visa queue we met John from Dublin. Coincidently he was staying at our hostel so we shared a taxi over to Dreamtime Hostel 2 in town.

When stepping out into Laos it hits you… the smells, the sounds of tuktuks, the muggy heat, the mosquitoes. I am back in Asia!! It was weird going from ice cold winds in Kaikoura to 36 degree heat, I swear this is the hottest I have ever felt before.

After a walk about town, we had a a delicious Laos lunch of pork belly and rice at a food court for 15,000 kip (just over £1). After that we braved the heat back to the hostel where John, Bekki and I sat under a fan for the rest of the day.

There are a few things to do in Vientiane if you have a bit of time here… a temple the other end of town and a bhudda park a bus/tour journey away. Other than that it’s just a little city. But with only a week in Laos I decided to look over passed emails of advice of friends who had been here, the most dominant tip being “Get out if Vientiane and go North”. So we cancelled our second night and booked a bus to Vang Viene the next morning.

That evening we were recommended to eat at Lao Kitchen. I had a delicious Red Curry! And once again I was amazed at how cheap it is here.

That evening we just had a walk around the night market by the river… Pretty unevenful but it’s only day one and we are pretty jetlagged!

But we made a plan… 2 nights in Vang Viene and 3 nights in Luang Prabang followed by some sort of mode of transport all the way back down to Bangkok in a week. Totally do-able on £85 right?