Following the Blue Mountains, we had a free day to tick off any interesting places in Sydney we hadn’t yet done. From the map of Sydney city and recommendations (thanks Mike) it looked like The Rocks was the last area – it’s in the north of Sydney next to the Harbour Bridge so it has some heritage in regards to the quarry and docks. But to be honest, all we did was simply walked around the area picking which cake shop to eat at. But $10 for a piece of cake, wow this place is not cheap!! We settled for a $7.50 muffin at The Bakers Oven with a whopping $5 for a cup of tea for one. I wouldn’t recommend this area as a tourist, all it is is cafes and Ugg boot shops.

That evening I was so excited to be reunited with The Crosslands. I had grew up with this family from the age of 2 until 12 before they moved to Sydney. I was devestated at the time because I lost my best friend Vicky – we were inseparable up until the big move. But their new life and home in Bankstown Sydney is beautiful and Vicky is getting married later this year so it was truly wonderful to meet her fiancé. We had a lovely home cooked family dinner and looked through embarrassing old pics of us as children. Her brother Sam has also grown/shot up, he was 7 when Iast saw him. You know you’re getting old when you start saying stuff like ‘I remember when you were this tall!’ – I have become that person now. But it was so wonderful to see them again and see a snippet of their life in Sydney! 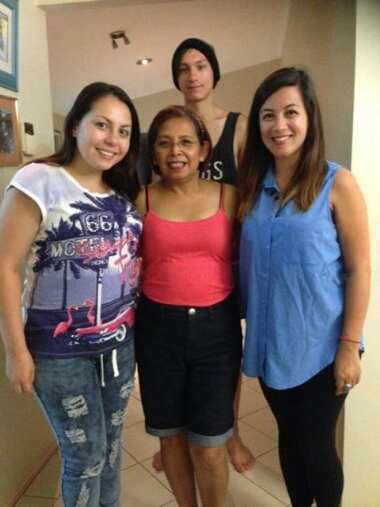 The next day was Bekki’s birthday!!!! That day Aiden, Alex, Bekki and I wandered over to Bondi Beach to give Bekki her first beach day of travelling so far. After some super greasy Fish and Chips and a quick reunion with Dragon Tom, we took a windy walk around the bay. It was soooo windy but the views were spectacular. 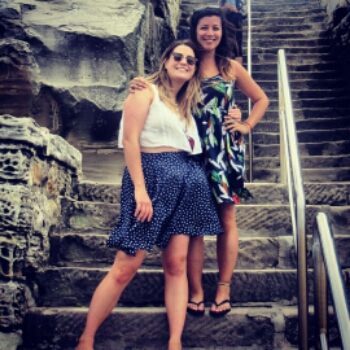 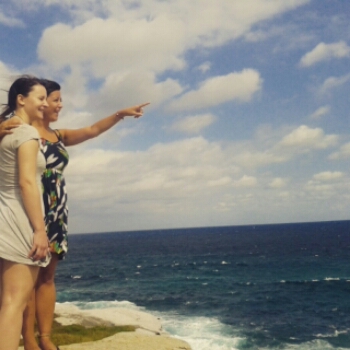 The McKinley Family are just out of this world with their generosity and kindness, not only have they housed and put up with us for the week but they took the time to decorate the house with balloons and streamers to surprise Bekki – in addition to this they also cooked us a delicious roast dinner. Please note: I did help with the carrots and they were the best carrots anyone had ever eaten, ever! Words cannot express how generous this family is, if this house was a hostel I’d give it the best rating ever – we were so sad to be leaving them. They really did give us a home away from home experience and even introduced us to bit of Australian Heritage through the “Aussie Classic Films” of ‘Puberty Blues’ and ‘The Castle’.

On my last day in Sydney I made a quick spontaneous decision, I wanted a laptop. An hour and a half, I had one. Meet Phil.

Named after the salesman that I haggled with. Also in the hope it will ‘Phil me with inspiration…’ Hmm, I think I may need to work on my writing skills. As much as writing a blog can be fun and theraputetic, it’s not through a touch screen Samsung mobile phone, it actually is really hard especially without spell check. In addition to this I really wanted an outlet to do a bit more creative writing as so much I don’t report on in my blog that I’d like to vent about. On my official bucket list of life I have always wanted to write a book, not to get it published, just to write one for myself. So when else am I going to get a chance or time to do this?

To finish off, throughout my life various friends have moved to Sydney and I always questioned why? From the pictures I had seen and from what I had heard it sounded okay, hotter and similar to the UK but it just didn’t appeal to me. It was on the other side of the world from England, too far away to relocate. But coming here and experiencing the city has really got me thinking about this place – I’ve seen so many cities across my travels and every now and then I say ‘I could live here’, but with Sydney I feel like I’ve found home. It’s got so much about it that captures what I love about England but happier and sunnier – if only I could ship all my friends and family here.

So…I’m not making any promises yet but I am considering getting a one year working visa and attempting to find work in my field of project management in advertising/marketing and in January 2016 and I think that will be the definite plan now unless something better comes along in the UK but I just feel like my time with Sydney isn’t over.

But for now onwards to Byron Bay.

One thought on “See you soon Sydney!!”