For the final part of my tour I stayed in a little village within the province of Fuijan another off the beaten path destination.

For accommodation we were staying in one of the famous roundhouses as well as a guest house owned by one of our drivers. Both a rare experience I definitely would not have found without this tour as I doubt either are on hostelworld.com!!

On arrival to Fuijan following the train from Shanghai I was overjoyed to find that in the passenger mirror of the mini buses is a tv screen and on that screen was KARAOKE!!! So all our journies around Fuijan would be filled with singing Ricky Martin, Lady Gaga and more. Amazing!

We arrived at the roundhouse in the dark so we couldn’t see much but the next day when we opened our doors we were greeted by this sureal open top view of the roundhouse surrounded by beautiful mountains.

We then decided to explore the local area and found a beautiful river surrounded by rice fields – people were working in the fields and also washing their clothes in the river. 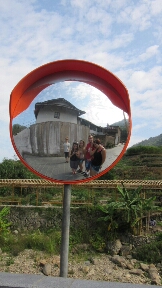 That day we walked to another roundhouse for tea tasting. On the way there we saw a snake… about a metre long and thin slithering through the bushes. I stayed clear of shrubbery after that!!

Tea tasting was lots of fun! There’s so many tastes and senses experienced by all the different teas produced in the area like nothing I’ve ever tried in the UK (and I drink a lot of tea). At the end I purchased one bag of flower tea which starts with a standard bitter green tea taste followed by a honey sweetness. Looking forward to trying it at some point on my trip or shipping it home!

We then went to see the view from the top of the roundhouses followed by a swim in a lagoon where the guys enjoyed jumping from the rocks and sliding down the waterfall. Then finishing the evening with a tour of the tea fields.

We had an incredible crazy evening on the last night of my stay with the tour. After dinner and after the boys purchased and set off a mental display of firecrackers (so intense it set off two mini vans) we joined a group of ladies in the street for some dancing – they do this regularly and the only way I can describe it is that its a mix between a zumba class and a group of teenage girls making up dance routines where everyone can join in. After rice wine and beers I had the crazy idea of getting back on board the mini bus parked ourside and doing some karaoke stationery… so that is what we did – then more firecrackers went off. The night ended with the guys skinny dipping in the river. I’m going to miss my little dragon family.

The next day was my day to depart the tour. So after a bike ride around the villages I said my goodbyes to the gang before getting on a public coach to Xiamen.